MFI Securitization: Clamp down avert a Sub-Prime Crisis developing in the India Economy

Two years ago the global financial markets witnessed an upheaval that caused more mayhem than the world has ever seen in its entire economic history. It was primarily attributed to the sub-prime loans.

So what’s a sub-prime loan?

Let’s begin first with what’s considered “prime”. It refers to individuals who have good credit ratings and to whom the banks lend directly. Sub-prime is just the opposite of this and as such mortgage loans (or housing loans or junk loans) is very risky as they are given to people with unstable incomes or low creditworthiness. However, where the risk is high, profits are equally high, tempting alot of lenders to get into this business in trying to make the quick buck.

Individuals with low creditworthiness are usually turned down by banks for home loans. Enter a business entity with high credit rating and is willing to take risks to give loans to the latter. So they borrow from the bank and disburse the amount to a number of low creditworthy individuals for an interest rate, higher than he borrowed from the bank. The interest is set high to offset a few defaults. Additionally, the interest is set on floating rates viz. as bank interests go up, so do these loans, which in turn escalate the Equated Monthly Instalment (EMI) system.

In their greed for profits, rather than wait for recovery flows to sustain new lending, these institutions securitized these loans i.e. converting these loans into financial securities that pay a rate of interest that in turn is sold to large institutional investors. The interest is met through the EMIs paid by the sub-prime borrower. The money got from securitization is used either to dispense more loans or close the original loan taken by the institution from the bank. 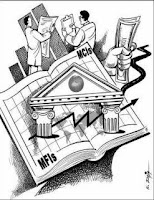 For institutions buying these securities, this was irresistible in an environment where housing prices soared on the back of huge demand for real estate and bigger and better homes. The bubble burst when the US economy slowed down and the sub-prime loans fell as a house of cards as it prompted foreclosure and defaults of these loans. A deluge of such defaults inundated these institutions and banks, wiped out their net worth. Their mortgage-backed securities were almost worthless as real estate prices crashed.


As defaults kept on piling, the institutions that took loans from banks weren’t able to service their loans. So they went to seek out new lenders and these too stopped as the latter realized that the collateral backing this credit would soon lose value in the falling real estate market. Institutional investors in securitised paper from the sub-prime home loan market in the US saw their investments turning into losses. In order to maintain solvency, more money had to be invested in the US. This amount had to come from somewhere. So they began large scale selling off their investments outside the US that led to stock market and currency collapses, including in India. But even this step fail to stop the rot as over 100 banks and financial institutions, even reputed ones such as Lehman Brothers and Well Fargo went bankrupt in the US and other parts of the world.

A similar development contributed by MFIs was developing in India. The State of the Sector Report (2010) describes this:

“MFIs ramped up their loan portfolio in India from US$ 252 million to US$ 3.8 billion between 2005 and 2010. The funding for this expansion came from several sources apart from equity funding. Bulk loans from banks are the most important source of funds. In recent years, quasi-equity, mezzanine funding, non-convertible debentures, debt assignments and sale of securitized debt have all emerged as other means of raising resources.” 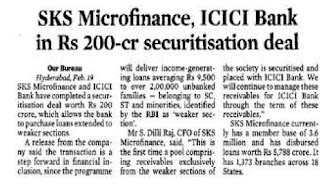 According to IFMR Capital, a Chennai based NBFC expects more than Rs. 1000 crore worth of securitization transactions to take place in the Indian micro finance sector for the financial year 2010-2011. Dr YV Reddy, ex Governor of The Reserve Bank of India who steered the country out of global mayhem caused by the sub-prime crisis and recently earned the wrath of MFIs for calling them moneylenders was first to sound the alarm bells. According to the Economic Times:
“Ultimately, it’s something like subprime lending...The same incentives are operating here... it was securitisation and derivatives that operated in the US. Here it is the priority sector lending by banks."

The IMFR blog proudly flaunts a new instrument: “IFMR Capital Mosec I, the multi-originator Special Purpose Vehicle, has issued two tranches of securities:  a 77 percent senior-rated tranche with an expected maturity of 6 months, and a 23 percent subordinated strip with an expected maturity of 11 months. CRISIL assigned the highest short term rating of   P1+ (so) to the senior tranche, which was subscribed to a Bank. The closing of this transaction has resulted in the emergence of a new pricing benchmark in the less than 6-month maturity asset class.”

See above photo of the signing of this supposedly landmark agreement. Introducing poison into our economic system as warned by YV Reddy?? Don’t miss the smiles of these MF promoters.

My friend Ramesh Arunachalam, a MFI practioneer and consultant in his recent post “Growth of Securitisation, Equity Investments and Priority Sector Lending in Indian Micro-Finance: Was Dr Y V Reddy Right After All?” provides an excellent analysis of this enveloping crisis spread by MFIs. For those who are interested in reading this analysis backed up by useful statistics, painfully complied read here.

The similarities between the US and India was that MFIs in pursuit of rapid growth multiple lent to the same borrower and often who did have the repayment capacity to service these loan burdens. There are however two marked differences between the MF securitization in India and those of the US housing sub-prime crisis. Firstly, in India, MF securitization is still in their infantile stage, and as a percentage of total securitization is mostly insignificant materially. Secondly, despite multiple lending to low credit worthy individuals, repayment rates are 99%  which we now know is due to coercive collection practices, and as such borrower defaults are not significant to have any material impact. High repayment rates are partly conditioned by the biggie MFIs eying IPO launches where these high rates condition valuation of their stocks post listing. In contrast in the US, once an institution securitises a loan, it does not remain on the books of the institution. Hence that institution does not take the risk of the loan going bad. The risk is passed onto the investors who buy the financial securities issued for securitising the home loans.
The real concern in India is once MFIs like SKS get their shares listed at high valuations; will they still concentrate on repayments or fall into the trap of their US counterparts, not bothered of their loans going bad as their securities recoup their advances? While IPO was the first level scam by MFIs, there are many analysts in the country, led by YV Reddy who feel the second level was the evolving micro-loan securitization racket.

The ground situation has changed in India as a number of investment bankers like JP Morgan, Karvy and latest Citigroup have downgraded SKS and other micro-finance institutions. For the full report of Citigroup’s downgrade read here. Fitch has specifically downgraded MF securities, including SKS.
This is the way The State of The Sector (2010) report provides a summary overview of the material contribution of securities
"Micro-loan securitization provides banks a profitable way to increase their investment in the microfinance sector through rated and tradable securities."

No longer is this option available as banks have stopped buying these securities, in fact no one does any more. This is blow for the MFI are already facing defaults in Andhra Pradesh; forced to curb lending in other parts of the country and are facing a cash crunch as banks are not releasing even sanctioned credit pipelines. But then only the biggies in the MF space avail the benefits of securitizations and not the rank and file of smaller MFIs.

If this trend of securitization was left unchecked, MFIs in the quest to amass wealth quickly would not have stopped just inducing borrower suicides but would have no hesitation to destabilise the entire Indian economy just as the sub-prime housing loans did to the US economy. Accordingly, for the Indian public, this crisis in Andhra Pradesh however should be a welcome one as it prevents MF securitization developing as a full blown scam. This however calls into question what RBI was doing all this while? But at least in this juncture, they need to act and act decisively to cut the problem in its nascent bud.

Posted by Rajan Alexander at 9:32 PM