George Soros and other PEs entrapped in SKS Microfinance

An initial public offer by India's SKS Microfinance sparked a debate on the ethics of profiting from the poor. The phenomenal year-to-year growth of MFI prior to the Andhra crisis was fuelled by new sources like private equity (PE), the capital market and debt instruments.

Private equity has helped push valuations to about 5.9 times book value, or nearly three times the global average. These PEs want maximum returns within the shortest exit and the resultant was the kind of excesses seen in Andhra Pradesh that led to borrower suicides and provoked a backlash against the the whole industry. With PE investment in MFIs, it is the PEs who control the company and who are the legal promoters of the company though their PR continue the facade of a social business.

Within this context, this blog had been advocating that SKS be treated as a proxy for the whole for-profit microfinance industry and that the script be hammered so that these PEs be taught a lesson of their lives. The only way they can do so is by suffering huge losses and never again enter the micro-finance in the country in order to earn mega-profits by exploiting our poor. The Andhra Pradesh Microfinance Act 2010 and the new (Malegam) RBI regulations have significantly curbed the profitability of microfinance institutions. The impact on SKS Earnings Per Share (EPS) is plotted in the graph. 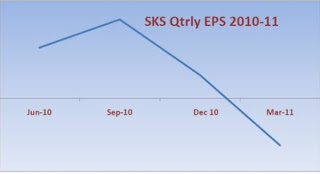 From a high of Rs 1,490, the SKS share touched a low of Rs 255 in the second week of May. Huge volumes prior announcement of Q4 results led the stock exchanges to investigate the script for insider trading violations.

Consequently the share was shifted from the rolling segment (series: EQ) to trade for trade segment (series: BE) with a price band of 5%. Bears caught by this step had to compulsorily square-off and the share rallied to Rs 343 close yesterday.

Among PE investors entrapped in SKS are George Soros firm, Quantum; Sequoia, Treeline etc.  The Business Standard article is republished to give an idea how hard PE investors are hit. RA

The dream that turned sour for many a retail investor long before has now begun to hurt the smarter ones, too. Early birds who had bought chunks of SKS Microfinance Ltd before the Initial Public Offer (IPO), at what for a while looked like throw-away prices, are staring at losses.

A set of private equity investors have seen their investment dip below cost price as the SKS stock dived below Rs 300 yesterday. After dipping to an all-time low of Rs 255 on Tuesday, SKS recovered to close at Rs 298.

SKS allotted shares to the public at Rs 985 in its IPO. The shares subsequently hit a high of Rs 1,490 in September 2010. On April 26, the stock dipped below Rs 500 on concerns over results. Even after this, most institutional investors were sitting pretty with gains of over 30 per cent. But last week’s crash after the company reported operating losses has caught many of them off-guard.

Two other investors, who bought immediately before the IPO at much higher prices are already deep in losses. George Soros-owned Quantum (M) Ltd and Tree Line Asia Master Fund had bought shares through secondary transactions at Rs 636 a share. As of March 31, Tree line and Quantum held 2.06 per cent and 2.37 per cent, respectively.

Saurabh Agarwal, director, Kennis Group, an advisory for PE funds, said the funds will continue to hold, as the long-term prospects are good. “Our internal estimates suggest a further downside of 20 per cent. But once the regulatory issues are sorted out, the stock will do well, as the permanent structures for the business are already in place,” Agarwal said.

SKS had placed at least 15 million shares with a second set of PE investors at a substantial premium of 30 times the face value between March 2009 and March 2010. Sandstone Investment Partners, the single largest investor in SKS, with 11.5 per cent stake, bought 8.3 million shares for Rs 250 crore in the company in 2009. Kismet Capital LLC, ICP Holdings and Bajaj Allianz Life Insurance are the other investors who took the stock at Rs 300 a share and are staring at losses. As of March 31, these investors together held a little over 20 per cent in the company.

According to Mukesh Jain, head of private equity, Equirus Capital, the investors have to take heart from the fact that they have the advantage of selling the stake in the open market, as the portfolio is a listed one. He said, “The cloud still over the microfinance space due to the regulatory issues will also reflect on the shares in the future. The money-making process is over and the business model will no longer work as it did earlier.” The dispute between the CEO and the promoters made things worse, he added.

Two funds, Catamaran 1A and Catamaran 1B, owned by Infosys’ chairman N R Narayana Murthy, bought 938,000 shares for Rs 28 crore in January 2010. This investment also went into the red on Monday.

According to the IPO documents filed with SEBI, Catamaran shall be subject to a lock-in for a period of two years, but not if the market value of the equity shares as calculated on the basis of average closing prices in a calendar week goes below Rs 400. Breaching the lock-in has become a distinct possibility, after the share prices dipped much below Rs 400 on Friday. In the past two sessions, the shares have been trading well below Rs 300.

Posted by Rajan Alexander at 12:42 AM