There was an interesting article that appeared in the media entitled "Sequoia's Roller Coaster Ride with SKS: The Gains & The Losses"
The article claims that the notional loss of Sequoia in SKS Micro-finance was a whopping Rs 1,199 crore or $268 million. The article however confirms that the total investment by Sequoia was only $ 48.5 million in two tranches. Obvious that something does not add up - a $268 million notional loss on an investment of $ 48.5 million!

The reality is that Sequoia had invested through two funds SCI II Llc and SCIGI I with average cost of purchase pegged at Rs 61.18 and Rs 137.53 per share, respectively. SCI II was a part of the group of shareholders who together offered to sell a part of their holding in the public issue that was priced at Rs 985 per share.


This part sale of their stake enables them to recoup not only their total investment of $ 48.5 million but also booked a small tidy profit. Their current cost per share is zero and the historic low of SKS script at Rs 255 and it current price - Rs 342. So where's the notional loss?
The article clarifies - "Notional loss is computed  assuming it had sold the shares at the peak of the market as compared to current value."
Oh really??
Here's the spin which the Venture Capitalist industry resorts to for attempting to generating public and government sympathy for bailout of the sector. RA

Sequoia's Roller Coaster Ride with SKS: The Gains & the Losses 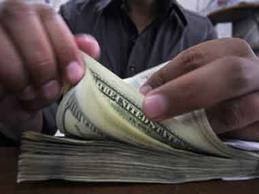 Sequoia Capital India was the first venture capital firm to spot microfinance as a sector that a VC can invest in India. In 2007, Sequoia participated in a $11.5 million round in SKS when the other PE firms were yet to spot the company. In 2008, it participated in another round of investment of $37 million. But the big PE firms joined the party only in late 2008 when SKS raised $75 million from a group of PE firms like Sandstone Capital at a much higher valuation.

In July last year, the company went in for a dream IPO to raise Rs 1654 crore, which was subscribed about 14 times. The company's shares, which got listed at Rs 985, rose to Rs 1490 on September 28, 2010. So small wonder, it was a multi-bagger, trophy investment for Sequoia.

Cut to the present. The shares hit Rs 262, the 52-week low of the stock, although it bounced back to Rs 297.85 at the close on Bombay Stock Exchange. Over the last few months, it has been a terrible time for the microfinance sector in general and for SKS Microfinance specially. Sequoia, which owns about 14 per cent stake in the company, has been considered a promoter at the IPO, and has a three year lock-in. So the private equity fund has been suffering all the brunt on the stock as it has no freedom to exit at will. Where does that take Sequoia's holdings in SKS?

To be fair, Sequoia made sure it didn’t lose all of the gains it made as it part exited during the public issue of the SKS. It sold part of its shares held by one of the two funds through which it invested over three years ago with mouth-watering returns of over 16x.

Sequoia had invested through two funds SCI II Llc and SCIGI I with average cost of purchase pegged at Rs 61.18 and Rs 137.53 per share, respectively. SCI II was a part of the group of shareholders who together offered to sell a part of their holding in the public issue that was priced at Rs 985 per share.

The value of remaining shares representing 13.9 per cent stake held by these two entities rose significantly when the share price of SKS Microfinance hit its all time high of Rs 1,490 last September, just weeks after its debut on the stock exchanges.

The value of shares held under SCI II Llc rose to Rs 760 crore (~ $170 million) as against cost of acquisition of Rs 31.5 crore (~$7 million) or 24 times in less than four years. The portfolio value of SCIGI I rose to Rs 738 crore(~$165 million) from investment of Rs 68 crore(~ $15.2 million) or almost 11 times. But the shares have a mandatory lock-in that restricts Sequoia from encashing any more of it soon enough.

While the company managed to steer through various issues at the time of the IPO and pretty much had a similar performance post listing as its Mexican peer Banco Compartamos, the firm was hit by a spate of bad news including adverse regulatory changes in its most important local market in India, the state of Andhra Pradesh.

This was visible in the latest quarter result of SKS Microfinance. It posted a loss of Rs 69.7 crore in the fourth quarter ended March 31, 2011 compared to a net profit of Rs 62.9 crore during the same period previous year, as the company went through poor repayment rates and also faced a new policy regime in Andhra Pradesh. The company's revenue also fell to Rs 193.8 crore from Rs. 304.5 crore in the same period.

Jittery investors have dumped the firm’s shares that hit a new low on Tuesday quoting at Rs 262 before bouncing back to make up for some of the loss and closed at Rs 297.85 a share at BSE. Even at this price Sequoia is sitting on a multi-bagger with SCI II Llc on unrealised gains of 4.8x and SCIGI I with notional gain of 110 per cent.

The value of shares held by the two funds is Rs 152 crore and Rs 147 crore respectively. In effect Sequoia has lost Rs 1,199 crore or $268 million assuming it had sold the shares at the peak of the market as compared to current value. The venture capital firm could well make up for this notional loss in the future, but for now it would be hoping, along with other investors who bet on the microfinance lender at the public offer, to at least get back to the price at which it sold part of the shares in the public issue, soon.

Posted by Rajan Alexander at 10:05 AM