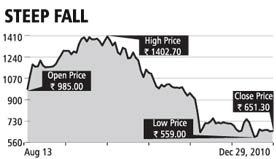 The bill, on being passed in the legislative council, would replace the ordinance issued by the government Oct 15 following a spate of suicides by many small borrowers.

The government turned down the demand by opposition parties to refer the bill to select committee to make it a comprehensive legislation. Women Development and Self-Help Groups Minister Sunitha Lakshma Reddy said this could result in the lapse of the ordinance. She said the legislation would come to the rescue of over 10 million poor women in the rural areas, who were being subjected to harassment by MFIs to recover the loans. She said the government issued the ordinance after 75 borrowers committed suicide during last few weeks due to harassment by MFIs.

According to the provisions of the legislation, MFIs can't deploy any agent for recovery of loans or resort to any coercive action. Any person, who contravenes the provisions, will be punishable with an imprisonment for a period of six months or with a fine which may extend up to Rs.10,000 or both.

The SKS stock gained around Rs 100 from last Friday’s close, on heavy long accumulations to close Rs 747.45 at the National Stock Exchange today. The stock is expected to open tomorrow with a huge gap and this week should see PE and VC investors like Soros and Treeline ensnared in the SKS share, who bought the share around Rs 639. This leaves only Catamaran, VC of Narayana Murthy, ex founder of Infosys, still with nominal profits, having bought SKS share at Rs 300.  This target also can be taken out within a month or two.

Let's salute the Andhra assembly for this progressive step.

Posted by Rajan Alexander at 11:22 PM