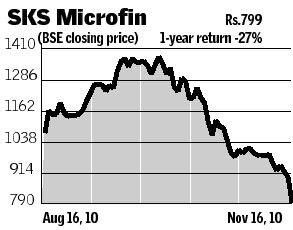 As expected, bears hammered the SKS script from Rs 992 levels at the start of the week to Rs 919.85 closing this week. When we started this campaign, SKS traded around the Rs 1010 range. Accordingly, if 100 SKS shares were sold at the time of our first posting, this would have realized a profit of a cool Rs 90,000 by now.

Technicals however show a mixed signal, suggesting that the script maybe range bound in price movement this week. However, being a new script with little price movement history, reading too much into technicals may not be advisable. Last Monday and Thursday saw bulls trying to break out on double the daily average volumes. Despite this, if SKS entered up losing over net 7% during the week indicates huge selling pressure, suggesting the share increasingly falling under a firm bear’s grip. The very fact that the bull charge was not sustained uniformly throughout the week is perhaps yet another indicator  - bulls left to marshal their resources for a charge in sporadic spells.
Bulls perhaps realize that they are badly trapped in this script and hoping to exit at higher levels. However, from Rs 910 downwards, we are entering the first of the series stop loss zones. Accordingly, bear’s are in with an opportunity this week to create panic selling that could see high volumes. As and when these stop loss points are triggered, we could witness a blood bath for bulls. The flow of bad news doesn’t seem to stop for micro-finance companies, This not only put a big question on their future earnings but also financial solvency as a going business.

The latest news flows are as follows:

1.  Micro-finance companies, including SKS are running scared, so much that they have closed down their websites. Official website of one of the largest microfinance institution in India, Spandana Spoorthy Financial Limited has been “out of order”  for the last few weeks. The website of Share Microfin Limited was also ”down” this week. Both these institutions are based out of the Indian state of Andhra Pradesh, which has come under severe stress since the issue of microfinance ordinance, by the state government. The official website of SKS Society, a sister concern of SKS Micro-finance, was also hacked prior to its initial public offering in the month of April this year. (Read more here)

2.  SKS Micro-finance is playing down its identity and going into preservation mode. At its modest office in a residential colony in Warangal district, India’s largest microfinance company has taken down its board. At its head office in upmarket Begumpet in Hyderabad, it hung a cloth mesh in front of its plush, six-storey glass building, ostensibly to protect it from the public ire over suicides. (Read more here)

3.  TV5 News a regional Telugu news channel has broadcast a news report yesterday alleging that more microfinance clients have committed suicides and that the ordinance has been ineffective in reigning in micro finance institutions. (Read more here). This may provoke the High Court to be less lenient towards the stay plea of MFIs against the Andhra Ordinance. Even worse, as long as Telegu TV and print media keep the focus on suicides and MFIs, repayment prospects of loans will suffer. As this situation extends weeks and month, it can lead to cash flow problems that could lead to MFIs being unable to pay staff salaries and layoffs, which in turn can accentuate collection of loan amounts.

4.  For the first time, Naxals have thrown their hats into the ring and kidnapped field staff of micro-finance companies. (Read more here). From now on micro-finance tycoons like Vikram Akula (SKS), Uday Kumar (Share) comes immediately under the radar of Naxals and we could expect from now on see their likes moving with AK47 armed security cordon. It would be sensational if Naxals manage to kidnap one of these MFI tycoons and in Al Qaeda style make them confess their crimes against public on tape. Vikram Akula in his book Fistful of Rice had admitted that he faced death threats from Naxals. Accordingly, the Naxal threat is no empty threat to be taken lightly and as long as it persists, MFI staff will be hesitant to visit villages and use strong arm tactics that affect loan repayment again.

5.  The Microfinance Institutions Network, a self-regulatory body of a clutch of 44 NBFC MFIs, has asked Rs 1,000 crore in the form of business continuity facility, a euphemism for emergency money, to ensure survival. Rumours are circulating that some MFIs are so cash strapped that they soon would not be able to pay staff. (Read more here).This news in particular can’t be good for bulls. Even if a tier-III MFI files for bankruptcy, the news can trigger bear hammering of SKS script to Rs 300 levels. MFIN said liquidity with MFIs had almost dried up, with collections during the past month having fallen a dramatic 50-90 per cent. MFIN felt this could be addressed if banks set up a Rs 1,000-crore liquidity easing channel. "Obviously, banks will price their loans based on the risk assessment," said Alok Prasad, chief executive officer of MFIN. He said an increase in bank rates would put a spanner in the plans of MFIs to reduce rates for borrowers. MFIs also seem wary of approaching the banks for new loans. "There are no requests for new loans from the MFIs," said the managing director of State Bank of Hyderabad, Renu Challu. No new microfinance loans were being given in Andhra Pradesh, which accounts for a third of the total outstanding of about Rs 30,000 crore. Read more here. Pinched by bank funding drying up, leading microfinance firm Basix has cut its advances to a third in the past month. In the past month, Basix has disbursed only Rs 100 crore against the up to Rs 300 crore it would have otherwise done. Read more here.

6.  The State government’s decision to review the operations of micro finance institutions has opened quite a can of worms as it exposed them, including SKS of charging usurious rates.  Contrary to what MFIs say, they are in fact charging very high interest. Most companies impose an interest rate of 30 per cent on a population that is largely poor. Countering criticism of their high interest rates, MFIs had claimed that the interest was 24 per cent, but the affidavits they have had to provide at the time of registration have exposed this as a lie. Interest rates are as high as 36 per cent and more. (Read more here).

7.  The Micro-finance Bill, which was ready, is now to be re-formulated again, taking into account the recent developments in Andhra Pradesh. Within the Congress, there is a strong move to cut MFIs to size and instead promote NGO-SHG-bank linkage as the flagship development programme of UPA II (NREGA being the flagship development programme of UPA I). If this is accompanied by the withdrawal of priority lending status to MFIs, this will sound the death bells for MFIs in this country.

To what extent MFIs are pushed to the walls is indicated by the fact that these MFIs are registering themselves in the districts despite their public opposition to the Andhra Ordinance.  The ordinance issued by the AP government halted all MFI operations until they register with the district authorities. In our archive post, Vijay Mahajan, the high priest of micro-finance admitted that days of business as usual is over and the need for MFIs to adopt a new business model if they want to exist. Read more here

• We believe that the headwinds for SKS and the MFI industry are still not over – we cut our estimates by ~25-35% for FY11-13 and reduce our PT by 30% to Rs 700. The stock is still expensive at 1yr fwd PB of 2.6x, and we think the issues with the sector are quite deep. Despite Tuesday`s 12% correction and the possibility of a technical bounce notwithstanding, we maintain our (still) contrarian UW, and don’t believe that it’s too late to exit the stock.

• Deep earnings cut, by 25-35%. Our key earnings changes capture the AP situation on multiple fronts: a) a drying up of disbursements in the state b) margin pressures from rising fund costs, lower yields and negligible securitization, c) higher credit costs from one-time losses in AP and d) lower opex as we see inevitable cost cutting in AP.

• Non-AP issues still not significant. We have not captured any issues outside AP. Media reports (ET, 14 Nov) suggest that MFIs are cutting rates in West Bengal (SKS’ second biggest state), but we think it’s a bit early to start capturing that in our earnings. Government intervention in states outside AP, however, remains a risk to our earnings forecasts.

• Too early to write off business model. The microfinance business model is being challenged in public debates on multiple fronts – efficacy in poverty alleviation, impact of high interest rates on borrowers, existence of over-leverage among borrowers, to name a few. We think MFIs could continue to exist, and profitably so, though aggressive overregulation is a risk to that assumption.

Key risks: Court ruling against AP ordinance (it’s still in court) or that AP ordinance does not convert into law from Centre.
Centre.

Posted by Rajan Alexander at 2:40 PM